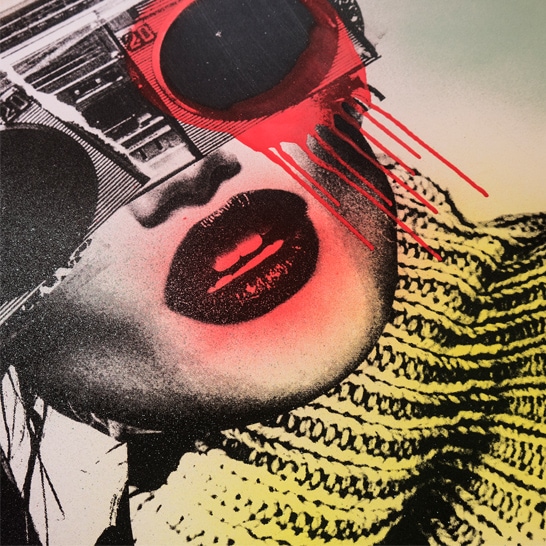 Born and raised in Brooklyn, NY, the mysterious DAIN is considered to be one of the most influential artists to emerge from the current New York street art movement.

Elusive to the end, even though you can find his work exhibited internationally in world-renowned galleries from Portland to Paris, DAIN hasn’t lost his passion for pasting in his home neighbourhood of Brooklyn.

Although he was tagging from an early age in New York, he began wheat pasting about ten years ago, spurred on by friends doing the same. Having already been doing a lot of t-shirt screen printing, the move into screen printed artworks and original pieces came naturally and to great applause.

Since then, DAIN has developed an international and incredibly devoted following, thanks to the rise of social media, although as a self-confessed nostalgic, he doesn’t think much of Instagram or Facebook.

DAIN faithfully produces works that are both evocative and beautiful in their composition. His love for old Hollywood glamour is a theme explored through elements of his work. On the streets of New York his trademark “circle and drip” around a single eye has been a characteristic from his more recent works.

DAIN remains a mystery, with his roots in graffiti, he creates a textured form of portraiture that has its own delicate yet complex language that is all his own.

DAIN’s gallery work has been featured in shows around the world in New York, Miami, Chicago, Portland, Montreal,Rome, London and Paris.

At Nelly Duff we are enchanted by DAIN’s work. As a gallery that promotes not only street art, but printmaking in all its forms, DAIN ticks all our boxes. This street art icon is a prime example of how in recent years, our favourite names in street art have transcended artistic boundaries to find themselves and their work as well respected in the fine art community as in the streets where they began their careers.