Wood cut (along with etching) is perhaps the oldest form of printmaking. This a described as a ‘relief’ method- a mode of print making which involves the gradual cutting away of a material’s surface to develop a composition in relief form. The surface is then inked, the printing surface laid onto of it (and commonly run through a press) to transfer the image evenly. If the artwork requires multiple ton al layers, the plate is washed, carefully dried and re-inked in areas to build up colour. More complex, multi-coloured artworks can be created by gradually reducing the surface area of the printing plate by cutting away areas that correspond to areas of the artwork that no longer require further detail to be added. 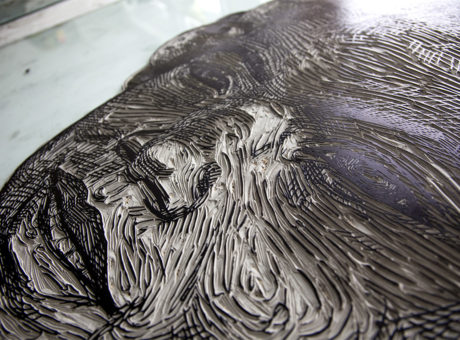 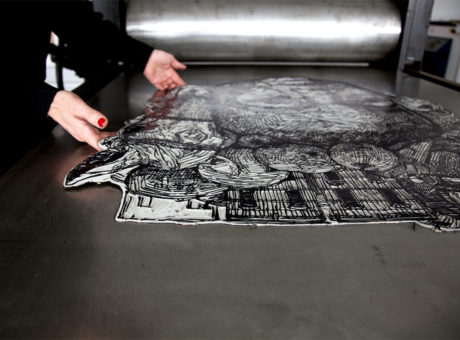 Wood is oldest used material for this method, followed by linoleum from the 1920s. The medium developed more as a mode of communication- used as an early means of producing large quantities of printed material, such as newspapers- but began to merge with the fine art world when wood cut became the medium of choice to represent idealised, exotic scenes of Japan in the early 18th century. Since then, the medium has been popularised by its use by Picasso & Matisse, as well as a host of contemporary artists up to the present day.

FEATURED IMAGE: The medium can be used to print large scale artworks, Lino-cut is suitable for use by Street Artists to produce large scale ‘paste-ups’. Nelly Duff Lino-cut master Gaia often produces carved blocks in access of 1m square, pasting his striking images onto the side of large buildings and urban walls worldwide. 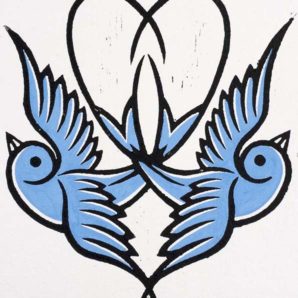