Its only a matter of days to go until My Dog Sighs’ brand new exhibition at Nelly Duff this November, so its getting very exciting indeed. We had a little sit down with Mr. MDS himself to discuss all things ‘Crylong’ and the inspiration behind this crazy new show!

ND: There are lots of amazing, interconnecting themes for your new show ‘Crylong’ – such as (the iconic) Martha Cooper, Krylon cans and their graphic design. Could you talk to us a little bit about what first gave you the idea behind the works?

MDS: To anyone who’s used a spray can for their art, Krylon cans represent the history and heritage of the artform they’re involved with. From my days as a school kid pouring over the photos of the legendary Martha Cooper (who I met last year in Miami but that’s a story for another day) in  Subway Art, krylon and Rustoleum cans were as integral as the letter forms and the ghetto blasters. As young kids, there were aspects we could emulate but the New York bronx and the spray cans were things we could only imagine.

My path as a kind led quite quickly away from hip hop and letter form graffiti, but having stepped into spray can art through a street art avenue I couldn’t help but still be influenced by the significance of these cans.

I got hold of some krylon and rustoleum cans a year or so ago (quite a task in itself). I’ve been sitting on them, pondering their significance pretty much daily since they arrived with me. The design of the cans is so beautiful and I wanted to capture its simplicity. My work, up until recently had been pretty frenetic and colourful and I felt it was the right time to pare the background back and let the eye do the talking.

The names of the cans were my inspiration for the faces I painted on them, after crushing them so delicately(!) with a lump hammer.  Be it the Goth Like beauty of the gloss black, the zombie like emptiness of beige or the mysterious masquerading mask of silver chrome, I had fun trying to capture, in the faces, a little of the narrative hidden inside the paint can.

For the reflection in the eyes of the canvases/prints I paid my own little homage to Martha Cooper and used her photos of B boys, break dancers and graffiti writers  of New York in the 80’s. 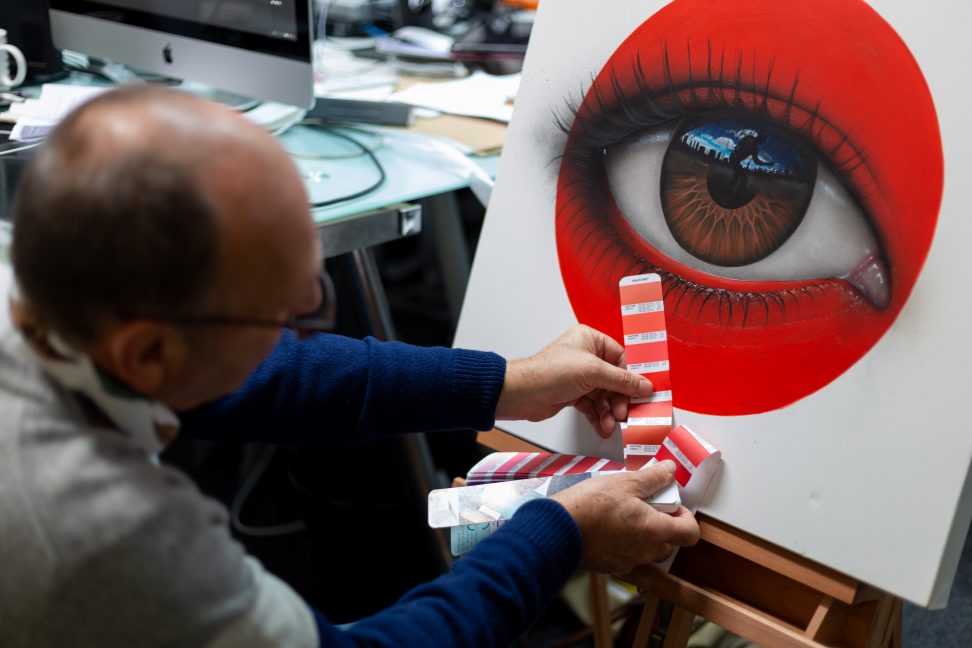 ND: This is your first solo show in London in five years, we are so honoured that we get to host this amazing new collection of works, so what made you take the leap?

MDS: I’m not sure where the time has gone. I haven’t been ignoring London, I’ve just enjoyed the opportunities of showing in different places over the last few years.  But, as this year started I knew I wanted to do something in the capital again. Nelly duff has always been known as a gallery, who since  the birth of street art, have  been showing and working with the pioneers. So it was an honour to be able to line something up with them.

ND: What was playing on your speakers while you were making the works for the show?

80’s spray cans. Martha Cooper. New York and the birth of hip hop. I really feel I should say Dougie fresh, master J and plenty of electro compilations  were oozing  out of the ghetto blaster in the studio, but I’d be lying. My music takes are pretty eclectic so with could be anything from Art Brut to Fontaine’s DC via National and Mogwai.

One things for sure, it’ll be on loud.

ND: Have you ever used spray cans as a medium before?

It’s not always been the case, but spray paint is pretty much exclusively my medium of choice when it comes to walls.

I have to mix it up a bit with brushes when it comes to my studio practice. But pretty much everything that I create uses spray paint in some way. There’s an aesthetic that just doesn’t exist any other medium.

I’ve just re read your question and am now wondering if you’re asking if I’ve painted on spray cans before. Spray cans as a canvas. Yeah. I’ve painted a few. But none with the history or pedigree of these. To take something which is a collectors item as it is, then smashing it up before bringing it back to life is pretty special. 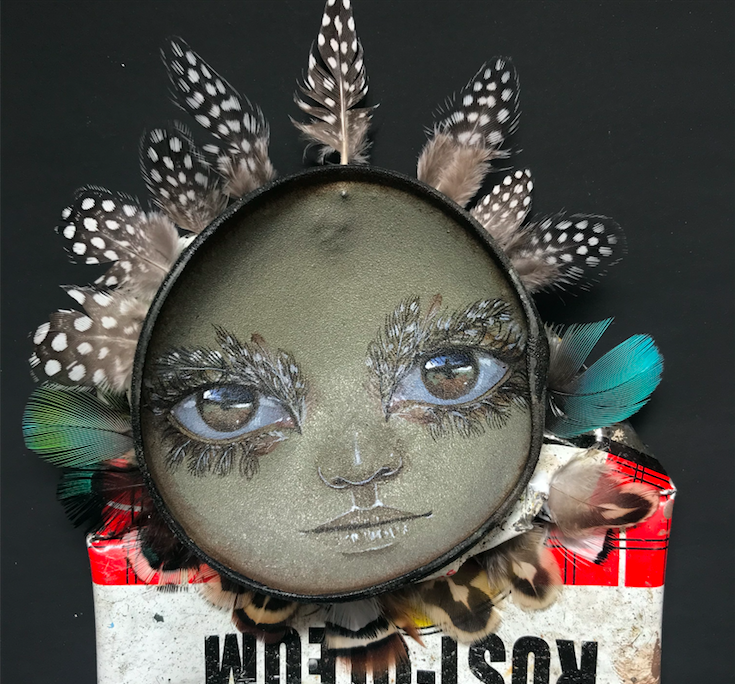 ND: Some of the figures reflected in the pupils of your eye pieces are street artists from Martha Cooper’s book ‘Subway Art’, could you name any names or are they to remain anonymous?

Anyone who’s pawed over ‘Subway Art’ will recognise some of the photographic references and possibly some of the artists too.

ND: Its not just going to be original pieces on show at Nelly Duff but limited editions too. Having been regularly releasing prints yourself for a long time, what’s different about these ones?

I’m buzzing on the editions. Mixing different print techniques and even surfaces to print on have taken these simple, almost graphic motifs and moved them up to the next level. It was quite funny seeing the galleries’ reaction when I said I wanted to do small editions for each of the five krylon circles and each with a different eye. But it felt important not to single out one isolated image for the edition. They’re almost collectible as a set.

And the sheet metal!! I swear I had fizzy knickers when I left the print house after seeing the metal prints. 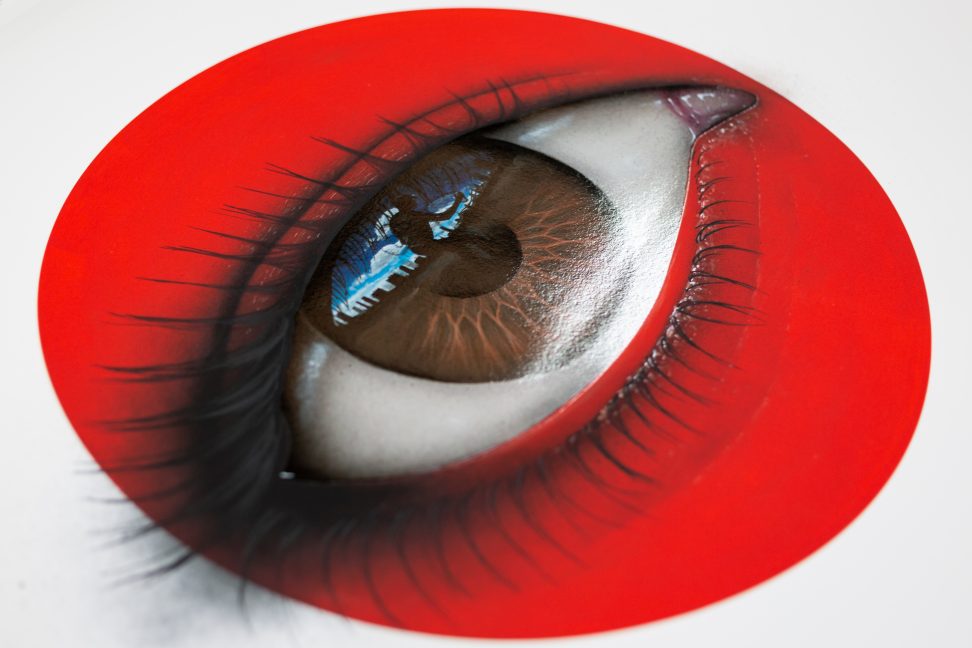 ND: And finally, if you could keep one artwork from the show, which one would it be?

Ah. Shit. That’s a horrid question. It’s like asking which is your favourite child. The cans are like a created family. I spend such a lot of time so intimately focused on their creation that I swear we get to the point that we’re taking to each other. (Probably an effect of the spray paint fumes). I know I’m the one painting them but it’s like with each brush stroke they develop their own character.

With the eyes,  I think I’ve jumped between each colour at least once, deciding that is my favourite before changing my mind the next day.

Blimey. Those answers are so diplomatic I should give up painting and become a politician.

Who am I kidding? Politicians diplomatic?!?

If I didn’t love them all I wouldn’t be comfortable showing them.

‘CRYLONG’ opens at Nelly Duff at 6pm on 7th November, and is on display until 14th November.