‘Do you do a lot of self portraits?’

‘No, but I think within my work subconsciously its autobiographical. There’s always a singular figure, and I’m a very singular person.’

Nineteenth century wooden snowboards, Victorian ledger sheets, salvaged oak, scrubbed and scribbled on desk lids,  no matter the surface, it’s all fair game in Davids’ studio. That’s not to say that Davids doesn’t respect objects, in fact its quite the opposite. A combination of an intense and lifelong respect for objects and their unique histories and a self-confessed ‘innate nervous energy where I need to be working’ has resulted in Davids’ seemingly endless mediums and ability to draw an artwork out from within an object. Nothing is off limits, but the only guidelines are that the surface or object must have had a bit of life experience, something Davids himself isn’t short of at all. 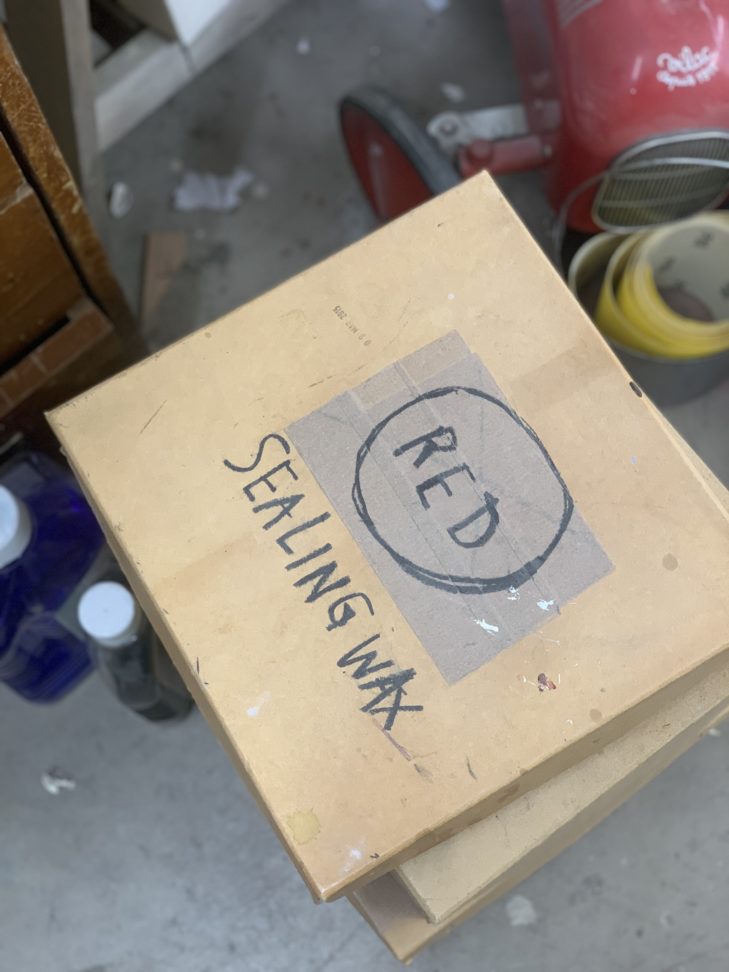 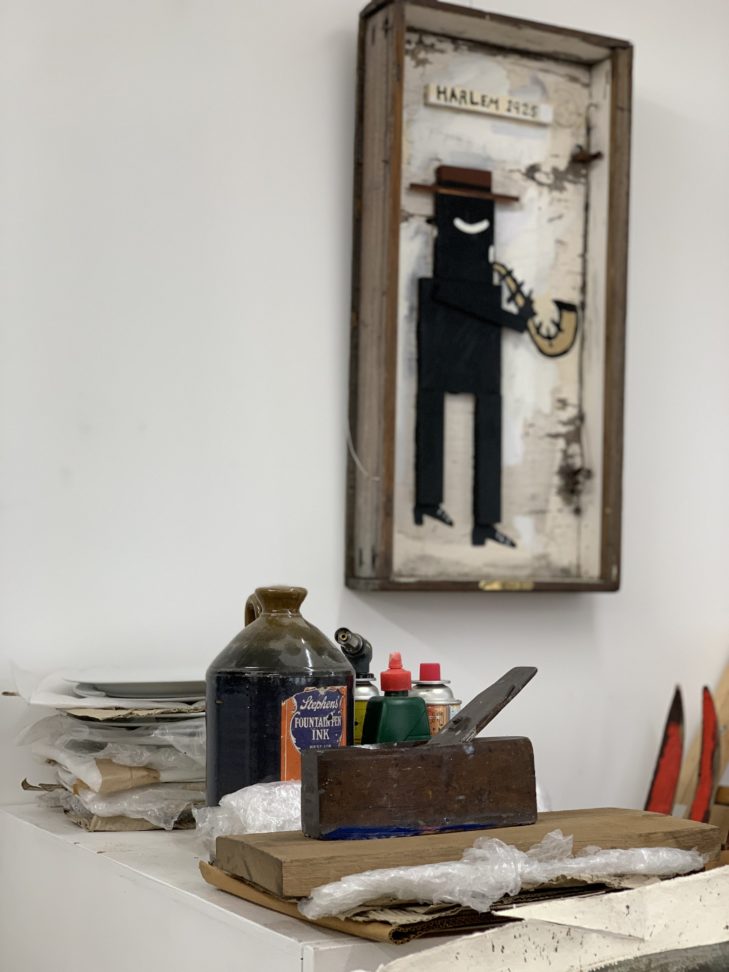 Whenever you ask an artist how long they have been an artist, its a pointless question, because without fail they will answer ‘always’, and its true. Artists have other jobs and their career path may vary, but the one common denominator you will find is that their desire and compulsion to create has been continuous, its just how much time they have been able to dedicate to it that determines to what extent others classify them as an ‘artist’. Having been both a head of a behavioural unit for an East London school, and having run his own successful gallery space, ‘F-art’ in Shoreditch for several years, it is Davids’ career as an artist has been long, varied and gathered incredible momentum. Most notably his passion for his work and desire to create has only increased with time, which has resulted in a studio filled with an astoundingly comprehensive collection of works on paper, sculpture, canvases and objects waiting to be morphed into artworks.

While exploring his light-filled studio, Davids’ picked up artworks one by one and delved automatically and eloquently into the journey behind each and every one, detailing the process of selection and creation, such as when we came across a large oar-like piece of wood mounted on another block of wood by his desk.

‘I bought a job lot of old oak off cuts, and this is as it was. As soon as I picked it out of the bag I saw a face and a neck, I put it on to a plinth, sanded it down to show the grain of the oak so all the indentations will stay the same. Its going to literally have a couple of lines for the mouth and nose and some small dots for the eyes and that’s it, its more about the shape and the movement of the wood, to show to beauty of the oak.

Let me show you something whilst were on the topic, this is a good segue way! Just thinking for a minute about historical context, this morning I was looking at that particular piece (points to a cross section of wood with a large crack in it and string sown either side of the crack all the way along its edges) So I’m gonna sand it down, and I’m thinking of doing a lady, you know like in the seventeenth century, and they had the basques and corsets? That’s going to be the corset, and here is the face. When I saw it this morning I saw it and though “Hang on Steve that’s a corset!” but it’s a wall piece that’s going to be sculptural and a wall piece, and its old, which I love. I’ll spend a couple of days sanding it and feeding it and then we’ll see!’ 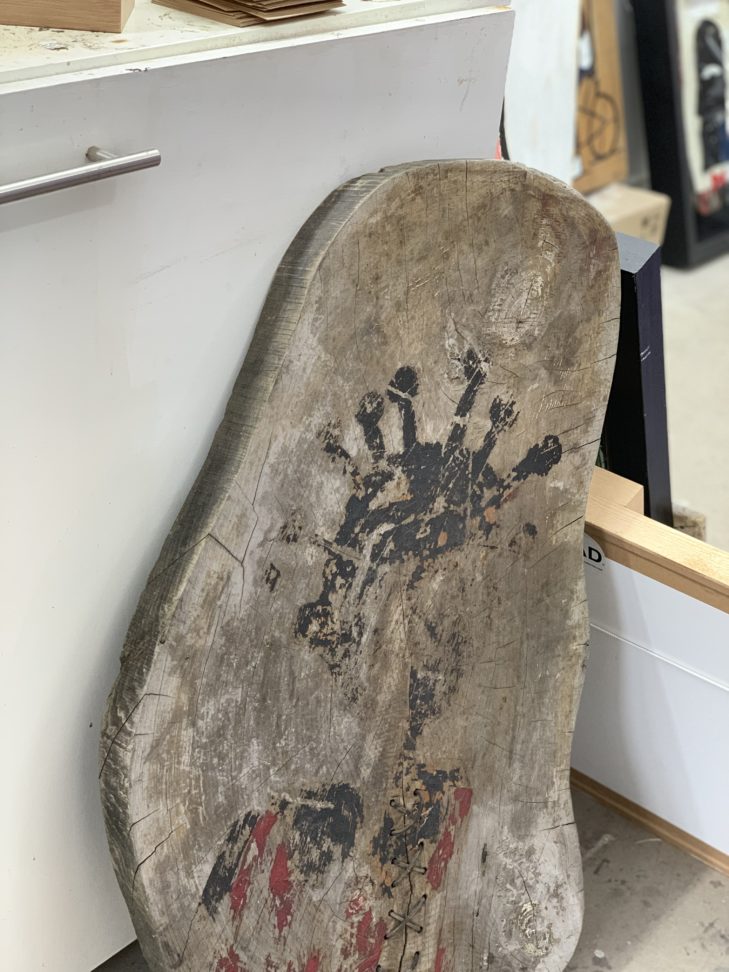 This re-appropriation of objects is what Davids thrives on, his passionate exploration of race, identity and history seem to pour onto whatever medium he happens to choose, his thickly applied marks and colours somehow meld seamlessly with whatever salvaged object it is to combine history and identity uniquely. Black identity in particular is a strong theme in Davids’ work, combined with his dark sense of humour and thick line, his stance is explorative, giving his subjects a microphone rather than giving them a voice. His characters already have voices, they stare out from the paper challenging the viewer, encouraging a dialogue, rather than making one particular statement. Conversation is so important to Davids’ work, because of the huge variety of mediums, colour and material – be it oil stick, acrylic, charcoal, crayon – it is the discussion that this mish-mash encourages that seems to drive Davids.

One of his most abundant and well-known mediums is his smaller paintings/drawings on Victorian ledger sheets, delicate pieces of paper covered from start to finish in minuscule, intricate calligraphic handwritings, detailing things like ‘laundry expenses’. Using these almost a primer for his drawings, his thickly applied charcoal and crayon drawings of gentlemen boxers, mysterious figures and sentences clash delightfully with the thin, twirled lines of nineteenth century calligraphy. But what appeals most to Davids about his beloved ledger sheets (he has a vast collection at home) is that they are all dated. Immediately the artwork is placed in a context, and that context is overrun by his own artwork, a story that was once closed is now open again. The author of those sheets had no idea that 100 years later they would be framed, viewed and seen in a new light, a thought that excites us (and Davids) to no end. 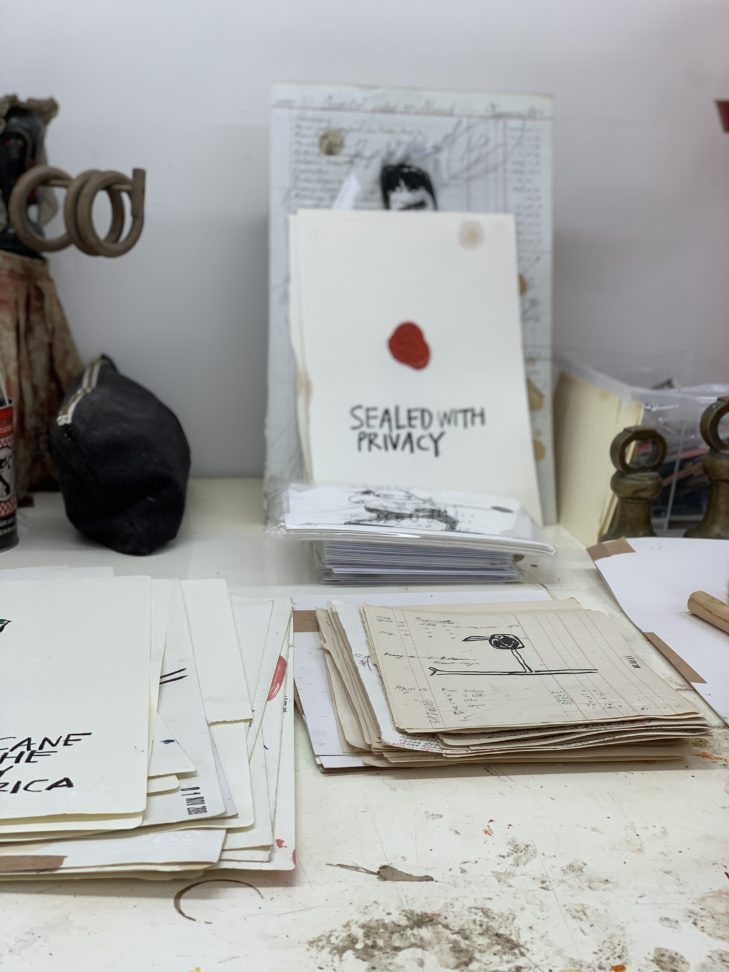 Humour, passion, and courage seep out of all Davids’s works. The fact that what he is most keen to do is to open stories, start conversations and cause reactions mean that his work speaks to everyone in a slightly different way. These idiosyncrasies and nuances are what set Davids work apart, but being peppered with glimpses of past greats such as Basquiat, its appeal is universal.

We are thrilled to be releasing a selection of original works from Davids exclusively with Nelly Duff this Saturday 20th April, so stay tuned to find out more on these unique pieces. 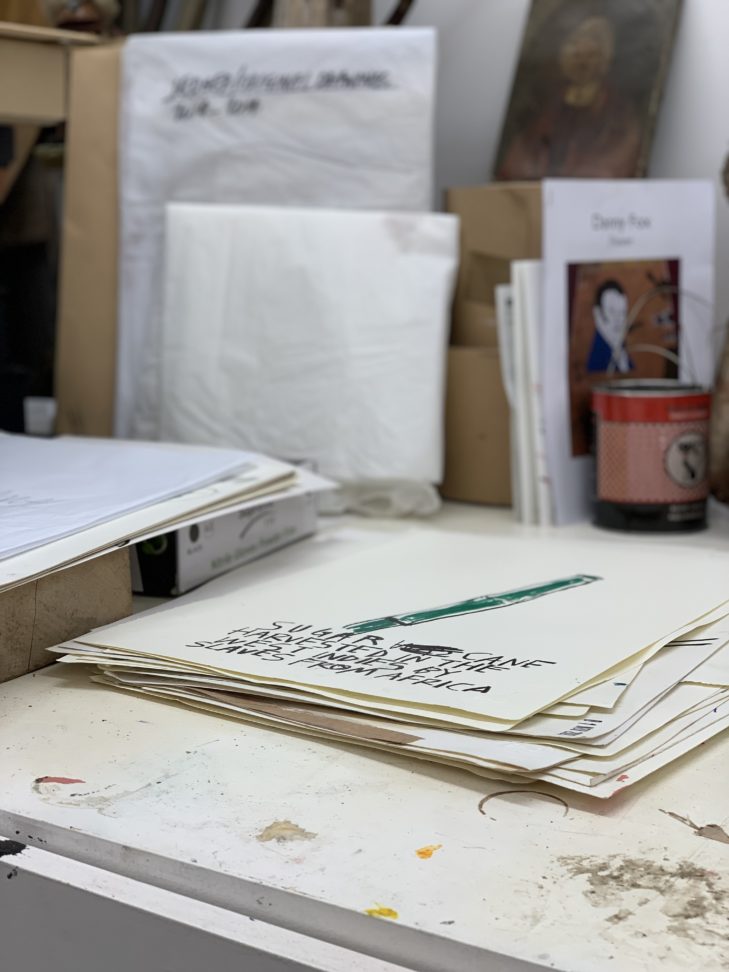 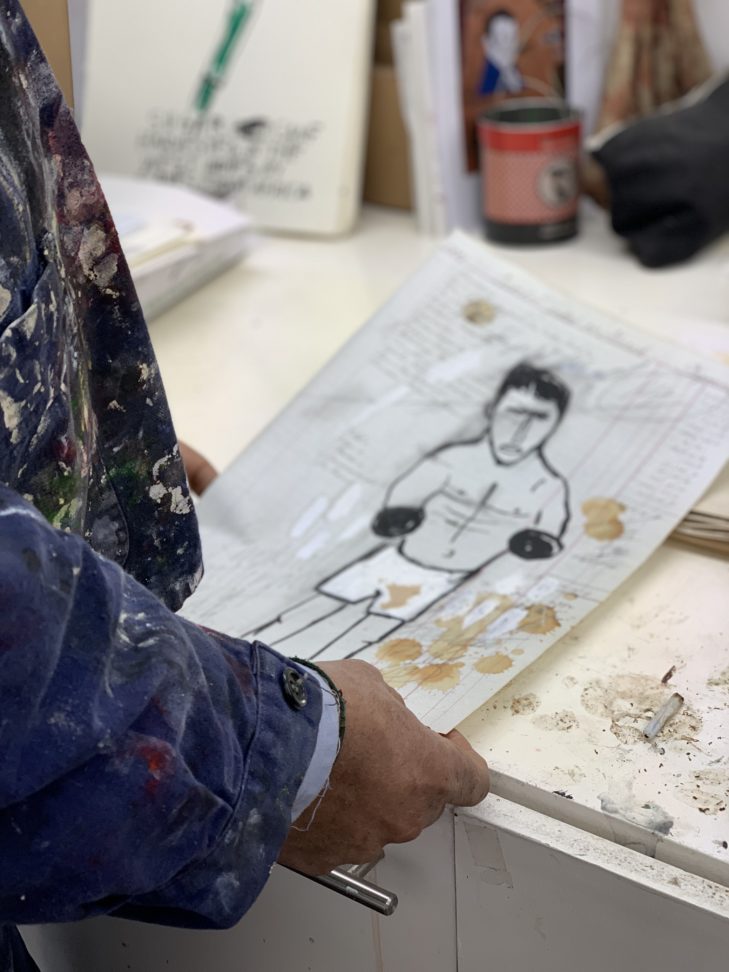 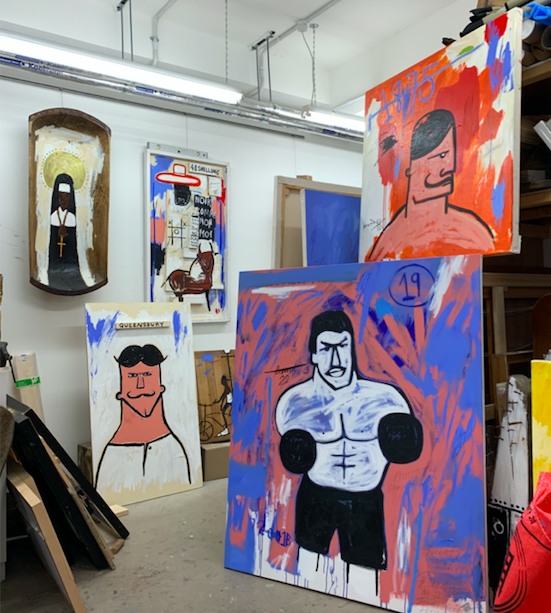 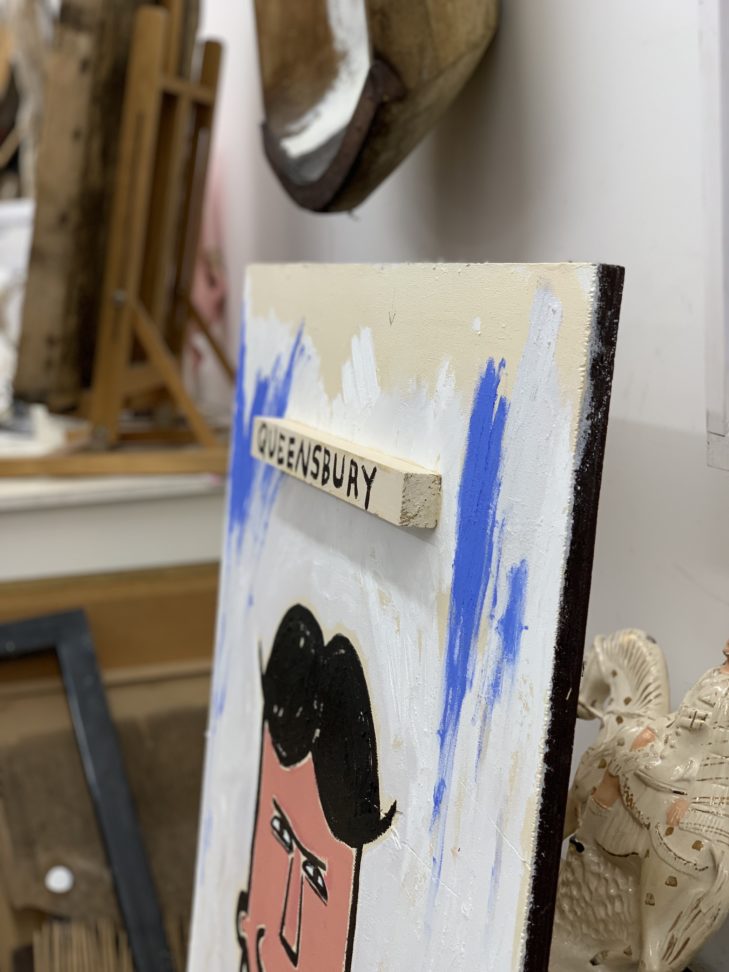 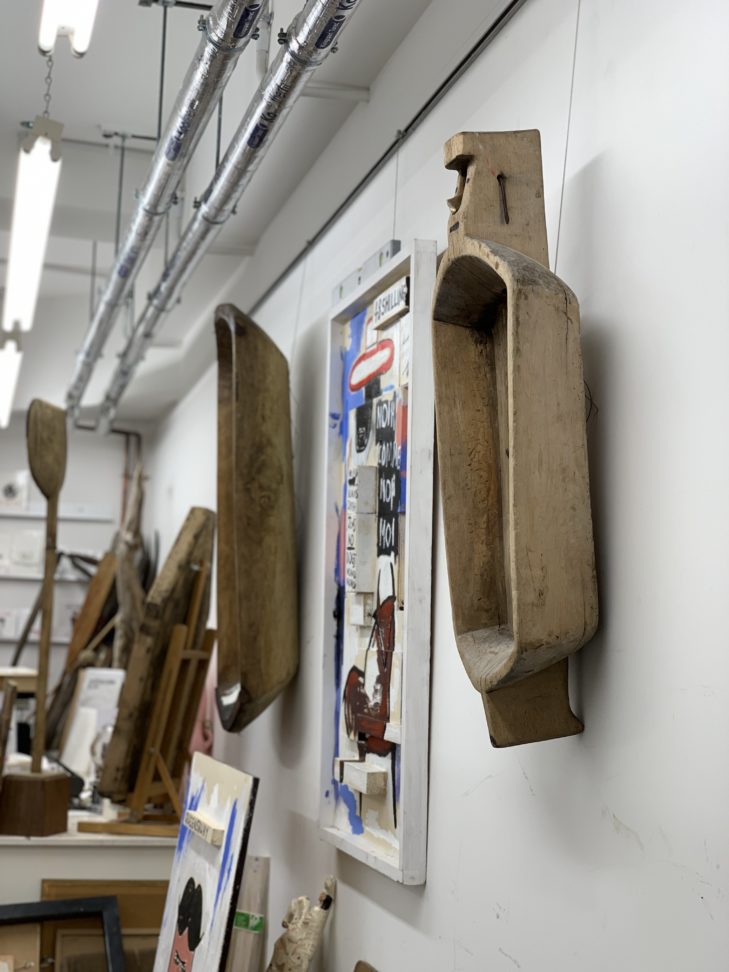 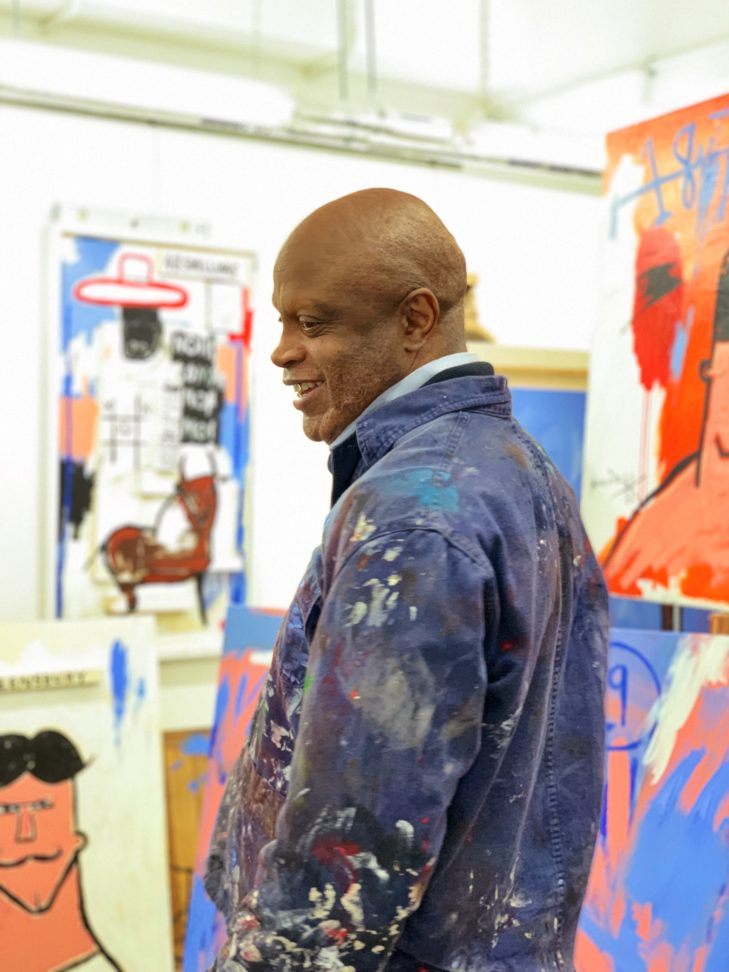