‘Dualism: the division of something conceptually into two opposed or contrasted aspects, or the state of being so divided.’

French, a Newcastle native, explores the theory of dualism in figurative, daring and darkly suggestive anti-portraits. His sensual and simultaneously abstracted and defined paintings and prints allow him to tread the line between urban and fine artist, utilising his medium of choice to reflect the fluidity and delicacy of his subject matter.

The idea of dualism explores the theorum that the mind and consciousness are separate entities, making conscious decisions independently of one another. This becomes apparent on studying French’s work, who often creates a whole image using two separate techniques to result in multi-layered pieces that maintain their drama and intrigue in print as well as paint.

‘Dualities’, French’s latest screen printed edition at Nelly Duff epitomises his exploration of this theme. Here, two figures hide in plain sight to make up an abstracted skull form. Their bodies are fragmented and repeated, stricken by dynamic and almost erratic (though meticulously painted) brush strokes, as if the artist changed his mind half-way through his brush stroke. French appears to nonchalantly overcome the great difficulty of achieving spontaneity and energy in a highly detailed painting, although it is clearly down to a combination of natural ability, observation, and a thorough understanding of the medium itself. 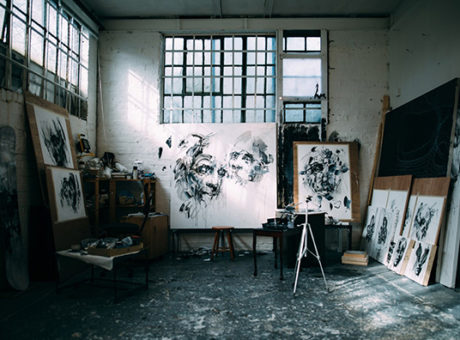 Having exhibited internationally, French is a household name in the urban arts, and have such feathers to his cap as having designed the cover art for the Donnie Darko soundtrack. His editions consistently sell out internationally, and for good reason, it seems his deep understanding and complex relationship with the medium is at once highly relatable but elevated, so that whether in print or canvas, his artworks stop you in your tracks. 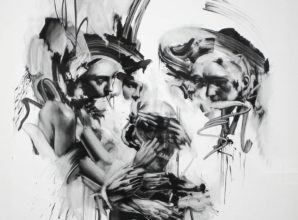