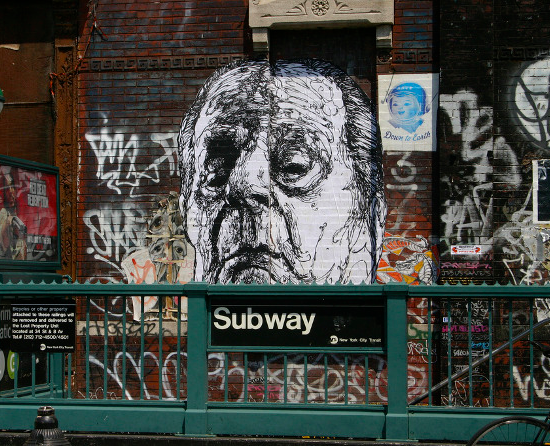 Gaia is an American street artist, based in Baltimore, whose work shows a sophistication far beyond his years. His works have focused on animal imagery to underscore his interest in bringing nature to the urban landscapes where he lives and works. Gaia often works on a huge scale to depict his subjects, yet always manages to capture great depth of emotion via the delicate tracery of his lino-cut pieces.

Most recently Gaia introduced ‘Open Walls, Baltimore’, a public project, during which renowned street artists came together to produce a series of mural artworks, amid the desolation of the artists’s hometown- blighted by a large concentration of derelict buildings, and uninhabitable homes. Gaia has been identified as a rising star of the street art world, with solo exhibitions in NYC, LA, San Francisco, Miami and Seoul.