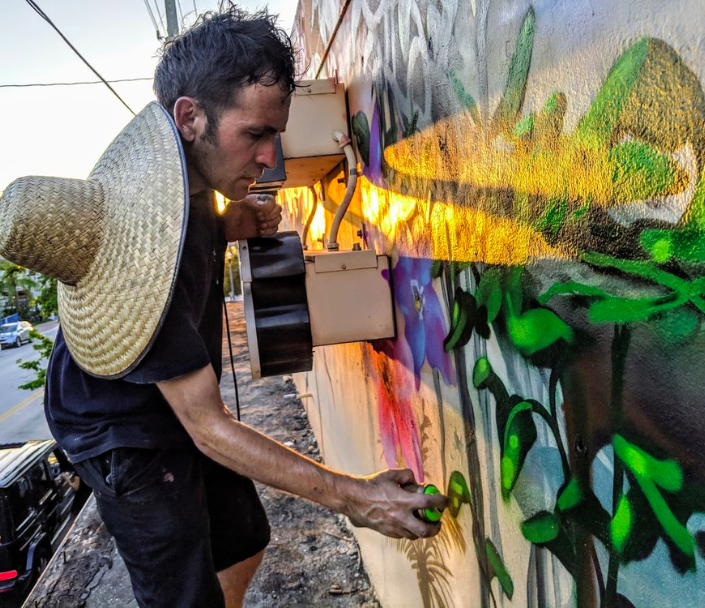 Xenz is living proof that the big names in street art don’t always come from big street art cities. Inspired by the books and films of 80’s New York, Xenz became a graffiti artist at the tender age of 14. Experimental to the end, Xenz’s early works were painted on the inside of derelict warehouses of Hull, in northern England, and from then refused to conform to the ‘norm’ in the graffiti world.

Having quickly become disillusioned with the conventional ‘Hip Hop’ graffiti style his cohorts imitated from their American counterparts, Xenz broke the mould and began to create more painterly, abstract pieces inspired by his love of nature and fascination with birds. Often painting purely from memory, Xenz utilises the fluidity and rapid nature of spraypainting to capture fragmental imagery and landscapes.

Since leaving his hometown over twenty years ago, he studied textile design at Edinburgh College of Art, lived and worked in Bristol alongside some of the UK’s most respected graffiti crews and artists, such as TCF, Banksy, Inkie and countless others. Xenz has gone on to have work shown in Miami, New York, New Dheli, and Sydney, as well as London.

Although he has worked with some huge names, his style still remains individual, and extremely unconventional in regards to traditional graffiti motifs. Xenz finds the beauty in the journey of the paint, and it is the mistakes and temporality of the material that creates the final piece, rather than the bright, defined and dynamic lines one might find in other graffiti works.