German born, Berlin based fine artist Torben Giehler has been making a statement with his vast, graphic works for the last two decades internationally. With an extensive list of solo and group exhibitions since 2000, Giehler’s grand entrance into the international art scene at Manhattan’s Leo Koenig Gallery (now Koenig & Clinton) was met with critical acclaim. Chief art-critic of the New York Times Roberta Smith applauded Giehler’s  ‘bright shapes, zooming lines and tilting planes’, meriting their ability to ‘dazzle the eye with their careering video-game sense of space and structure’, not to mention that his works must ‘require hours of applying masking tape’.

Detail from ‘Servin‘, Giehler in his Berlin studio

Citing influences from Al Held, contemporary artist Franz Ackerman and master of graphic line Piet Mondrian, this earlier work is intriguingly different to his later works, which tower over the statuesque Giehler with swathes of boldly coloured shapes building into graphic landscapes. However it was only a few years later that Giehler’s work began to fall in line with the alpine landscapes we are familiar with now, as described in a memorable 2005 New Yorker article by writer Nick Paumgarten. In his article, profiling the antics of Leo Koenig he describes a visit to Giehler’s studio, he characterizes Giehler as  ‘a red-faced German whose shyness might be mistaken for hostility’ in somewhat typical irreverent fashion. Although his brazenness is paralleled in his account of Giehler’s behaviour, recalling Koenig’s appraisal of one of his pieces, proclaiming ‘That is fucking brilliant’, which Giehler promptly mimicked back the gallerist with a mock-cockney accent.

Paumgarten goes on to describe the artwork they are appraising, detailing a ‘giant canvas’ with a mountain ‘composed of multicoloured quadrilaterals’. This fascination with mountains, possibly stemming from Giehler’s German heritage as well as his passion cycling throughout the alpine valleys has resulted in a career long love-affair with these sublime and graphic depictions. From the Matterhorn to K2, the world’s most beautiful (and terrifying) peaks have been subject to Giehler’s brush and tape. 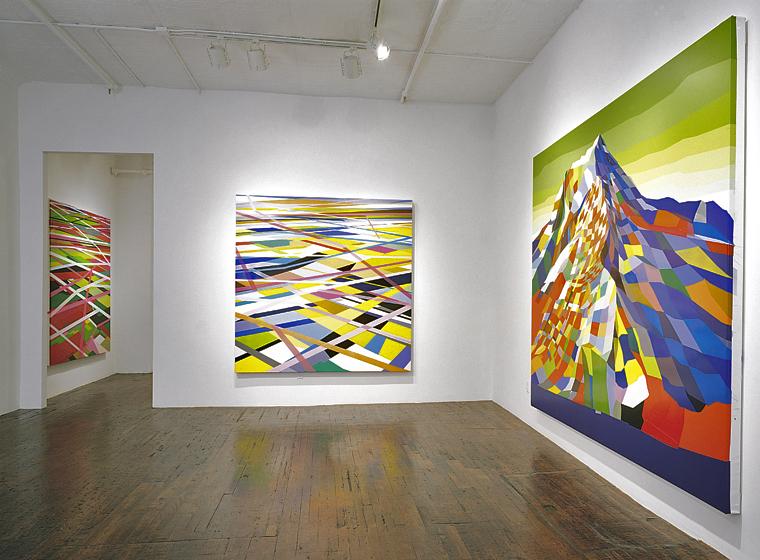 In the early 2000s, when Giehler was based in New York the digital age was well and truly underway. This heavy immersion into graphic art and computer science can be seen throughout his artworks, particularly his less figurative more abstract works that could be closeups of a set of distorted computer pixels. However, geometric art can be traced back as far as Grecian times, but it is this modern edge that fills Giehler’s works from edge to edge. Their slight imperfections too are what sets him apart from his graphic contemporaries, a slight drip and a curve here, a strip of white canvas there. Like the mountains Giehler depicts, they are filled with flaws and crevices that by no means diminish the value of the overall composition.

While Giehler has been creating his vast mountain-scapes for the last fifteen years, it is only in the last few that he has began to experiment with print. Print makes an excellent fit for Giehler’s work in not only its accessibility, but the strong lines and bold colours in his work translate clearly and effectively to limited editions. In the last year he released two exclusive editions at Nelly Duff, both printed with cutting edge flatbed technology – a technique that allows even the grain of the original canvas to be captured and printed with exact and high quality finish. The benefit of print too is in its adaptability. Giehler’s 2018 canvas ‘Servin’, based on the French name for the Matterhorn is a technicolour spectrum of vibrant shapes, however for the edition ‘Silver Matterhorn’ it was adapted to echo the mountain’s signature grey palette, with a hand-applied silver leaf background. 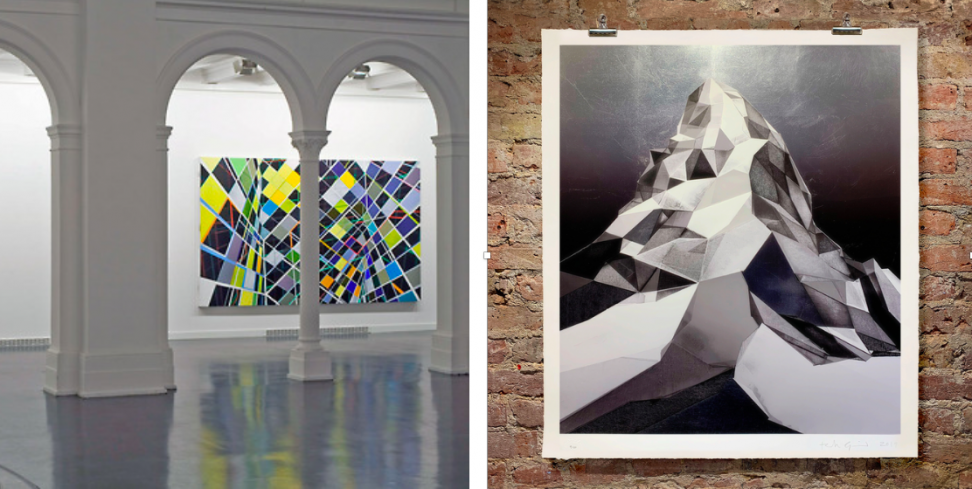 Still exhibiting internationally and with seemingly increasing vigour, only earlier this year Giehler showed at the XIII Bienal de la Hubana in Cuba, and then again in New York, Giehler proves himself to be one of Germany’s leading lights, silently overtaking his contemporaries with a consistent remarkable output.  Although he is a far cry from Paumgarten’s ‘shy’ acquaintance, his artwork’s impact continue to provoke the same astonished (if expletive) effect.